Well, I knew after I posted that other message, Gavin would choose to show up!

Thursday, February 17th, I woke up with contractions as 6-7 minutes.  As the morning wore on, they got closer and more intense.  We had a doctor’s appointment anyway, so we headed there at 9am, and the doctor sent us right to the Hospital.  We checked in at 10am.  Then, I labored for about 4-5 hours without much difficulty.  Then, he decided it was time to come…my water broke, and my doctor was still 15 minutes from the hospital.  Thus they called the doctor who is on stand by…she showed up, and 3 pushes later, he arrived: 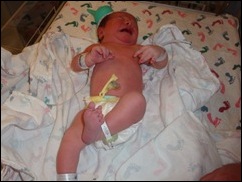 My mom came in and helped out with the other kids along with sister, and Brian’s parents.  Thank goodness!!!

We have a number of other pictures on our picasa site at: https://picasaweb.google.com/Mom2Ewa/JanFeb2011?feat=directlink

Ethan & Nyla are being great older siblings!!  Ethan is sharing his favorite bear with Gavin and Nyla likes to get him his pacifier.  Well sometimes she keeps it, but it is all good…

Thanks for the well wishes!!

Patti
We are trying to keep up our site for our family and friends. We are parents, children, siblings, friends.